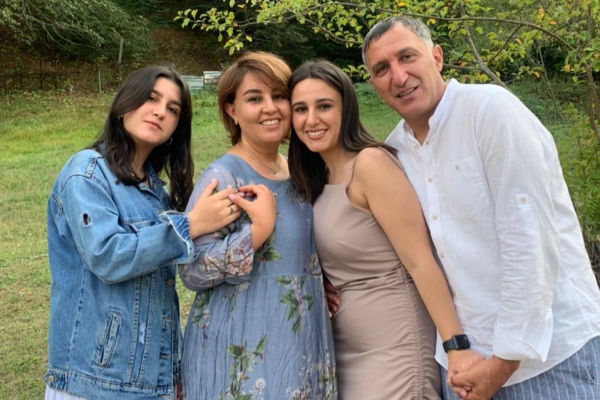 Arman grew up in very difficult times for Armenia when the Soviet Union fell so this had a huge influence in his life. He accepted Jesus through Canadian missionaries that were showing the Jesus film in his village. It was the first time he heard about having a different kind of life and started to think about hope and where his life could become meaningful. Later when he was looking for something more to do for Jesus he heard about Young life in Moscow and met Gary Parsons. Young life gave him new understanding of life and love.  It has already been 17 years that he’s lived in the world of young people, sharing His love and hope with them.  His vision is to reach more kids, make them followers of Jesus, and send them to others to reach more. His dream and work is to open more clubs and raise more leaders.

Lilit was from the last generation of soviet union pioneers. When the Soviet Union fell she felt like her life was destroyed. She felt that her god was dead.  Then she heard about Jesus. He came into her life as a ray of sunshine and changed her life. She began thinking all the time what to do to share the hope of Jesus with kids like her, to give them hope and to tell them that they are not alone.Lilit had studied to be a journalist but abandoned that dream after doing a report on the street kids of Armenia and realizing how desperately they needed someone to provide them with a place to go for mentoring, Bible study, love and support. Then when she and Arman heard about Young Life from friends that live in Moscow, it came as a second ray of sunshine. She fell in love with Young Life. Her hope is to have a Young Life leader in each town and village in Armenia.

Arman and Lilit Asatryan are a well-educated couple who are committed to Young Life Russia and the Former Soviet Union (FSU). She and Arman decided to commit their lives to all the kids in their city, from the darkest street corners to the most remote orphanages and schools in villages you can barely reach by car. Their work has expanded throughout Armenia and they work full-time, 7-days a week to bring the love of Jesus to the many kids of Armenia in need. Lilit and Arman’s flat is always full of kids. They support many street kids and those in need of a place to have Bible study or ask questions, or just have a meal and place to sleep.

2013 was an extraordinary year for Young Life Armenia. They took over 1,800 young people to camps, hikes and adventures.  They had their first international camp with kids from Georgia, Azerbaijan, Armenia and Syria. Pray they will have many more camps like this in the future.

Arman and Lilit have two beautiful daughters Helen and Nanay.

Check out the interview of Lilit when she visited the Foster City campus in January 2016.

Watch the latest report from Arman.