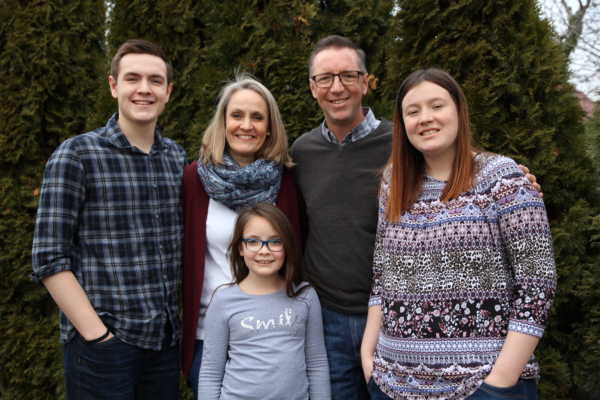 Wini was “sent out” from Central Peninsula Church (CPC) in January of 1992 to serve long-term with Campus Crusade for Christ’sCommunity Health Evangelism ministry in East Africa. That summer she met Bill while serving in a Somali refugee camp in Kenya. Bill served on staff with CCC at Ohio State University for two years before moving to Albania in September of 1993. A long distance, pre-email friendship extended between Albania and Zambia for two years before they were married at CPC in August of 1995.

Bill and Wini attended seminary at the International School of Theology in San Bernardino where Bill earned a Masters in Bible and Theology. In January of 1998, they moved to Albania where Bill served as the National Campus Director of Campus Crusade in Albania and Kosovo for ten years until the role was passed to an Albanian in January of 2008. In June of 2008, the Babione family moved to Budapest, Hungary where they gave leadership to the Campus Ministry of Cru Eastern Europe / Russia. They were part of a team seeking to serve and provide direction to the campus ministries in 20 countries of an area that spans 11 time zones.

In June 2018 the Babiones’ moved back to the United States. They continue to serve with Cru as a part of their Athletes in Action (AIA) ministry. They have three different elements to their service with AIA. They serve with the International Leadership Team that helps use the vehicle of sport worldwide for evangelism and discipleship. They have launched an initiative called MomentumOhio that uses the profile of athletes to add momentum to the work God is doing for his Kingdom. And lastly, Bill is working on a doctorate in Intercultural Studies from Western Seminary in Portland, Oregon. He plans to be a resource to churches in reaching unreached peoples in their communities. Bill and Wini have three children, Susanna, Ben, and Ellie.

Meets at The Fox Theatre