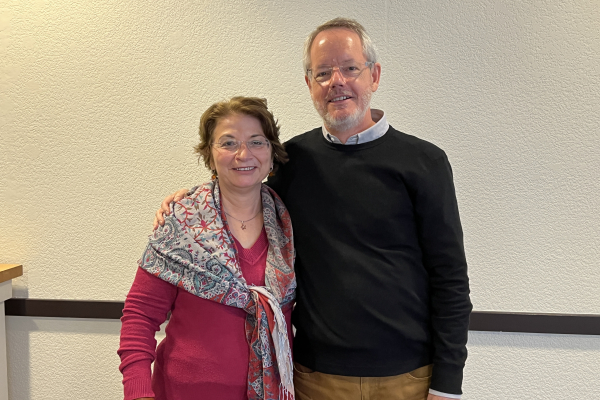 Fred started going to CPC in 1978, a few months after he gave his life to Christ. When he went to Italy with Inter-Varsity he was the first person from CPC to go out as a missionary. Fred and Anastasia met in Italy. Fred had gone as a student to do his last year of college and then went back two years later to work with InterVarsity, doing evangelism among university students. Anastasia went to Italy from Greece, where she is from, to get her degree in pharmaceutics. They met in an evangelistic Bible study that Fred was helping with and that Anastasia attended and where she had given her life to Christ. She’s from a small village on the island of Evia.

Fred is an architect, and received his training and work experience in the United States, Italy, and also Greece, where he and Anastasia live. He is in charge of the work of the design Group., a part of Greater Europe Mission. In his role as the director of the design Group., does architectural design work and consulting for evangelical churches, camps, Bible schools, seminaries and other ministries in Europe. He also coordinates the work of outside consultants in Europe and the United States who donate their time to help with architectural and structural design and related work.

Anastasia owns and operates a pharmacy in Rafina, the town where she and Fred live, and this gives her many opportunities to talk about the “medicine that never runs out” (and has no side effects!), which is Christ.

To find out more info on the the design Group click here. Hear more about Fred and Anastasia’s ministry in this video.