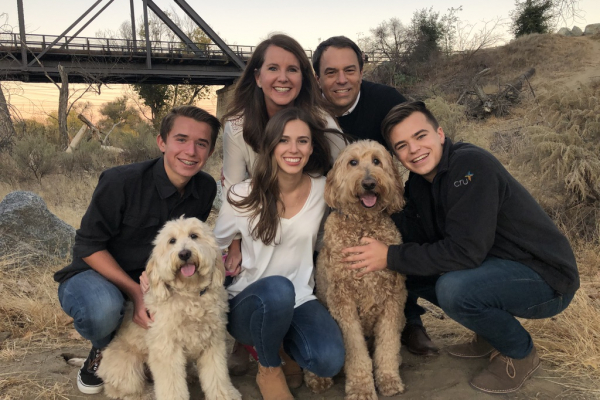 John grew up at CPC. He remembers reading Mere Christianity by C.S. Lewis and becoming convinced that Christianity was, in fact, true. When it came time to leave home and start his college career at UCLA, John’s brother, Norman, encouraged him to investigate the different Christian groups on campus and to plug into one. John found Campus Crusade for Christ (now Cru) towards the end of his first week of classes and the ministry quickly became “home.”

After four years of involvement with Campus Crusade at UCLA and several mission trips, John sensed God’s call to join the staff of Campus Crusade. However, before reporting to his first assignment at UC Irvine, he did an eight-month pastoral internship with Mark Mitchell and shepherded the Central Peninsula Church (CPC) singles group. John’s training and the ministry experience he gained while at CPC helped prepare him for ministry at UC Irvine.

Ramie became a Christian at a young age when her mother shared the gospel with her. She grew up attending different churches and moving a lot because of her dad’s job with IBM. It was in her high school years that she really owned her faith. A woman on staff with the high school ministry of Campus Crusade (Student Venture) began discipling her during her junior year and teaching her to share her faith. Ramie went to college at Cal State Fullerton and was very involved in ministry at the First Evangelical Free Church of Fullerton.

In 2002, John became the Campus Director of Campus Crusade on the UCLA campus (John’s alma-mater and where Bill Bright began the ministry of Campus Crusade in 1951). He led a team of  staff, fulfilling their mission of seeing “lost students become Christ-centered laborers.”  In 2017, John was asked to lead a new team of staff that seeks to reach international students throughout the Los Angeles area, with the two main campuses being UCLA and USC.  UCLA and USC have a high population of international students (about 25,000 total)—some of whom come from the hardest to reach places like: Iran, Saudi Arabia, India, Vietnam, China, etc.  This international student focused ministry of Cru is called: Bridges International.

John is also getting his PhD in systematic theology, and is in the final stages of his program.

The Books are passionate about raising up the next generation of Christian leaders and seeing them impact the world. They have three children: Katie, Brennan, and Josh.